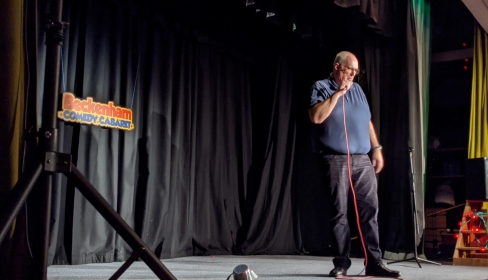 The star of last Friday’s Beckenham Comedy Cabaret at St George’s Church Hall in Albemarle Road, Beckenham was local Anerley man Seamus McLaughlin who stepped up to steal the show.

Beckenham Comedy Cabaret promoter Jody Kamali has worked with some of the biggest names in comedy, including ITV’s Harry Hill, but when Jody that last Friday’s headliner was running late and would miss the show, he asked audience regular Seamus to step up and do a routine.

“When Jody asked me to step in, I was shocked at first and wasn't going to do it, but my daughter Olivia encouraged me to do it,” said 59-year-old Seamus who works as an IT Solutions Architect.

“I’ve done about 12 or so gigs haven't performed for over 8 years, it was mainly small crowds in pubs so appearing in front of 200+ people in Beckenham was a great way to rekindle my love of stand-up!”

“I was pretty much winging it. I was struggling to remember some of my very old material that I used to do when I previously did a bit of stand up. It was mainly anecdotes and I elaborated on stories from my life.”

“Afterwards, I had a fantastic response from the crowd and my family, which was amazing. I was really buzzing as it was well received, and I loved being back on stage in front of a live audience.”

On the Friends of Beckenham Comedy Cabaret Facebook page, one audience member commented: “It was an awesome night, as always! Seamus was an incredible stand-in headliner and the audience loved it.”

“Jody works very hard to keep the standard of acts very high at Beckenham Comedy Cabaret and he spends a lot of time doing local material and engaging regulars like me in his material and funny audience participation games,” said Seamus. “As a family, we always book tickets as soon as they come and it's the first event in the family calendar each month. There is always a great variety of acts.”

Many of the acts on the Beckenham bill are award-winning, up-and-coming, and many have appeared on the bill at venues like the BBC Theatre, Soho Theatre, Udderbelly and Covent Garden’s 99 Club.

The monthly comedy nights are always a big hit with the locals who turn up in their droves month on month to be entertained by the weird, wonderful and hilarious acts.

Show dates for the next 3 months...