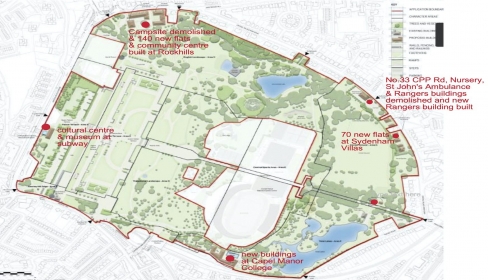 The major project, first submitted last spring, involves the conservation and repair of heritage assets across the Park, landscaping, new paths, the demolition of some existing buildings, the change of use of some land and the construction of new buildings, including two housing developments.

Around half of the £40M cost of the scheme is to be funded by the two new residential developments.  The existing caravan park, at Rockhills in the northern corner of the Park, would be cleared to make way for 140 new flats built on part of the land with rest being returned to public access.  Further east, along Crystal Palace Park Road, the existing nursery building, St John’s Ambulance station and Park Rangers’ maintenance building would be demolished and replaced with a second housing development of 70 new flats called Sydenham Villas.  The London Plan requires developments on public sector land to provide 50% affordable homes, however the Council is proposing only 24 flats of this category.

The nursery would be relocated to a new Community Centre, to be built on the existing caravan park site.  A new Park Ranger’s building would be provided slightly further west from the current building.  St John’s Ambulance would be relocated either to the new Community Centre or a new Information Centre proposed to be built on the site of the existing building, close to the Penge Gate.

A new Cultural Centre is proposed at the Upper Terrace and would be linked to the Subway.  Some of the Farm buildings at the Capel Manor College would be demolished and rebuilt, and others renovated to improve facilities for the Public.

The meeting is on Thursday 25th March at 6.30pm and the public can it via YouTube.

Full details of the proposals, and a link to the meeting can be found here